A real estate expert said that not only is it an ideal entertainment and entertainment destination for the local community, walking streets are also an important place to introduce and promote local culture, attract tourists from all over the world, thereby promoting the development of neighboring real estate types as well as the regional economy.

Transparent and closed 6 floors from basement B2 to 4th floor of the project, King Crown Infinity pedestrian street is a harmonious combination of green landscape, lake, waterfall creating a unique hanging garden. This design not only has the effect of cooling the air, providing a relaxing space for residents, but also a highlight to attract residents and tourists to visit and shop, adding customer traffic to the busy commercial shop system here. Located in the heart of the project, King Crown Infinity pedestrian street will overcome the limitations of outdoor pedestrian streets such as being independent of weather conditions and can operate regardless of day or night without being influenced by traffic, thereby helping the owner to earn huge profits.

The commercial and entertainment center of Thu Duc City

An industry expert said that, with a stable population structure and dense population density, Thu Duc City is also a promising land for the development of modern retail channels. However, like many other areas in Ho Chi Minh City, Thu Duc City still lacks large-scale shopping and entertainment centers. 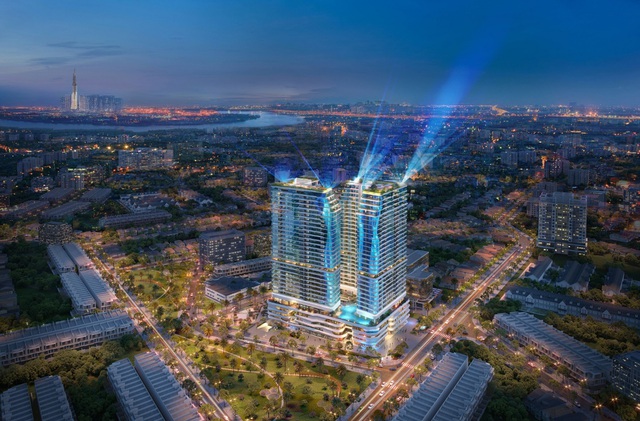 In the past time, along with the rapid urbanization speed, many large-scale investors have also quickly invested in modern commercial centers, but still like salt in the tank compared to actual needs.

According to Nielsen research, the modern retail channel is growing by 11.8% and will continue to maintain double-digit growth for many years to come. However, modern shopping channels in Vietnam only reach 25% of total retail sales, still low compared to many countries in the region such as Thailand (34%), Malaysia (60%), or Singapore (90%). … Especially, in Ho Chi Minh City, compared with the per capita income of nearly 500 USD/person/year, the average retail area per capita is only 0.13m2/person which is too low and not commensurate with the growth potential, only 1/7 of Bangkok and 1/5 of Kuala Lumpur.

In that context, the appearance of King Crown Infinity with 6 high-end commercial floors, providing nearly 23,000m2 of the retail floor will contribute significantly to supplement the shortage of supply in the East area and quench the thirst for shopping – entertainment – entertainment for new city residents.

“Not only is it an ideal place to live in the heart of Thu Duc City, but King Crown Infinity also promises outstanding price growth potential in the future for investors when owning a modern commercial center system with a unique indoor pedestrian street highlight. This is a unique attraction that helps the project receive great attention even though it has just been launched,” an investor said.

Located at 218 Vo Van Ngan, Binh Tho Ward, Thu Duc District, King Crown Infinity luxury apartment and commercial complex is developed by BCG Land Joint Stock Company – a member of Bamboo Capital Group. Expected to be handed over in 2023, King Crown Infinity is expected to become a new symbolic work of the Creative Urban Area in the East of Ho Chi Minh City. Customers interested in the project can visit the website www.kingcrowinfinity.com.vn for more information.